Okay, so this is where all the bios of characters go.

THIS RP TAKES PLACE 2 YEARS AFTER AANG DEEFATS THE FIRE LORD. IT IS THE YEAR 102 AG (after genocide)
*If your character was involved in the war make sure your age matches up*
**If you wish to make a longer bio, post it onto your blog page and put a button on your bio to link to it.**
***You can make a character picture if you want, but you don't have to. It would help with appearance***

It's best to use the following format as an outline, but if you want to add anything you can.
RP Name:
Age:
Gender:
Location:
Element:
Profession:
Nature:
Dislikes:
Likes:
Appearance:
Allies:
Backstory:
more rp info
AVatar wiki 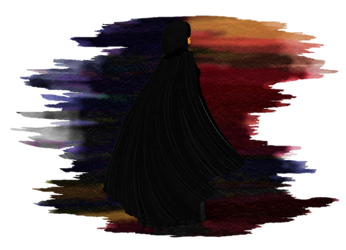 RP name: She'd rather let you try and figure it out. Referred to as "The Shroud."
Age: Clearly around 16. Her size masks her age.
Gender: Female - this is only known because of her figure and voice.
Location: Sightings have been reported everywhere - origin also unknown.
Element: Nonbender - but she uses a sword with special and secret properties. Engage her in combat and you'll find out what it can do soon enough.
Profession: Assassin, rogue, rarely a mercenary. She's currently wanted in nearly every important city.
Nature: A human time bomb. Cool and silent, but will lash out unexpectedly if provoked.
Dislikes: The light, people, loud noises, certain types of meat.
Likes: The cover of darkness, solitude, cold areas, the music of an ocarina or harp, candied pecans.
Appearance: The cloak and mask hide most things, but when in combat the cloak flutters around, showing her tight bodice, gloves, pants, and boots. The mask has always hid her face, but sometimes her blue eyes have been seen. Sightings report black hair in a tight long braid over her shoulder, and short side bangs falling delicately over the top of the mask.
Allies: None, but from time to time two animals can be spotted with her: a large black panther with dazzlingly green eyes, and a black wolf with one blue eye and one amber-red eye. Rumors say her approach is heralded by a black hawk.
Backstory: Origin unknown and a well-kept secret. Rumors say she spent five years forging her sword. Always wears a tight black outfit underneath a billowing hooded cloak, and works silently in the shadows of both war and peace. Her face has never been seen; hidden by a mask. Given you can find her and she doesn't kill you first, she will do your bidding if you pay her enough - but what she does with the money she never says. Rarely does she fail on assignments - but one failed assignment she will never forget. She was paid a generous amount to assassinate both Azula and Zuko, but when she attempted to execute her orders Azula was too quick and fled, but not before brutally injuring her. She stood before Zuko, wounded yet ready to finish what she had started, but one look at his face and she faltered. Disgusted at her impulsive feelings and suffering from the wounds Azura had inflicted, she fled the scene. Ever since then she has honed her abilities, and resolved not to fail, but rarely does she take orders anymore. She likes to follow her own path and will actually turn down money if she thinks the assignment is wrong - or if she just doesn't like the people trying to hire her. Unfortunately, more of the latter has occurred. Several people have attempted to bribe her into murdering the Avatar - and ended up losing their lives instead.
ThisIsSirius

RP Name: Nova
Age: 15
Gender: Female
Location: Northern Water Tribe
Element: Fire
Profession: No job, nomad
Nature: quiet, tempered, kind-hearted
Dislikes: her father, war
Likes: traveling, Northern Water Tribe
Appearance: long dark hair, burn on right arm from father, dark eyes, fire nation clothing (thick jacket and furry boots while in water tribe)
Allies: Fire Lord Zuko
Backstory: Nova spent her youth at a young girls academy for fire bending. Her father was an esteemed general in the Fire Nation army. After the war, the greatest generals were a disgrace to the nation because of the tragedy they had caused. Only the men with young children were given war treasures, so her father received none because Nova was too old. After receiving the news at the Fire Lord's palace that he would not be rewarded for his duty he attacked Nova and burned her arm. She tore away from his grip and away. When running down the hall she looked back and ran right into the Fire Lord. She explained why she was running and he decided to give her the supplies she needed to do what she always wanted, to travel the world, because he had been in her place five years before. She used the money to board a ship bound for the earth kingdom of Omashu and began her journey.

RP Name: Sonara
Age: 16
Gender: Female
Location: Lower ring of Ba Sing Se
Element: earth
Profession: works full time at the Jasmine Dragon
Nature: speaks her mind, tempered, sassy
Dislikes: secrets, dishonesty, her brothers, aristocrats
Likes: tea
Appearance: long dark hair, wears typical green earth kingdom clothing
Allies: Rhya, Tyron
Backstory: Having grown up with six older brothers that are powerful earth benders, a shadow was cast over Sonara. She showed signs of being an earth bender at a young age but was never trained because her father did not believe a girl could be a powerful bender and her mother was not a bender so she could not train her. All of her brothers grew to be high ranking officials in Ba Sing Se and the army, Sonara was a disappointment to her father because she never went on to be something great. Her father died in the attack on Ba Sing Se during the Hundred-Year War and she was finally free. Her mother became sick soon after and Sonara did her best to help her but after months of trying endlessly, she passed. Sonara could no longer live in the family's wealthy estate because it passed on to her eldest brother at the time of her mother's death. Sonara was forced out onto the street. With the small amount of money she had Sonara purchased a small apartment in the lower ring. After two weeks of searching for a job she finally became employed at the Jasmine Dragon.

RP Name: Lotus
Age: 17
Gender: Male
Location: Northern Water Tribe
Element: Water
Profession: Traveler
Nature: quiet, reserved, highly intelligent, well-meaning
Dislikes: the cold, secrets
Likes: water bending, his mother
Appearance: chestnut hair with a blue headband, water tribe tunic, light blue eyes
Allies: mother, father
Backstory: Lotus's mother is  a high ranking official in the court of the Water Tribe leader, his father was a general in the Earth Kingdom army. Lotus grew up in the Northern Water tribe surrounded by her people and grown in her culture. He showed signs of being a water-bender at a young age. His mother was relieved to find he was like her, a water-bender, and not an earth-bender because she could not be with an Earth Kingdom man. She did not keep his father secret from him, but warned him not to tell anyone. He would receive gifts from his father during the wartime but when he was fourteen, the letters stopped coming. Lotus feared his father was killed but no confirmation came and hope grew in him he was still alive. His mother had lost all hope and tried to convince Lotus there was no way. Even when the war ended, no information came. Lotus became a skilled water-bender and was itching to see the world. Not only did he want to go somewhere warmer, but he hoped to find his father, to meet him for the first time. He begins to prepare to travel to Ba Sing Se.

RP Name: Rhya
Age: 13
Gender: female
Location: Lower rings of Ba Sing Se
Element: Nonbender
Profession: student
Nature: energetic, positive, well-meaning
Dislikes: inferiority, school
Likes: adventure, excitement, tea
Appearance: red shoulder length hair, green eyes, emerald arm band that belonged to father
Allies: Sonara, Tyron
Backstory: Rhya's family was first from Omashu. When Team Avatar helped the people escape, her family did too. They continued on to be refugees, her parents and baby brother, Tyron. While traveling in a small group of other refugees they were caught. Rhya's mother gave Tyron to Rhya and told her to run. She ran into the woods and turned back to see the small camp ablaze. A week later she got to Full Moon Bay and was able to cross to Ba Sing Se. For a month in Ba Sing Se she lived on the streets. When Azula took over, a family helped her and Tyron off the streets and she has lived with them since.
Blazeheart